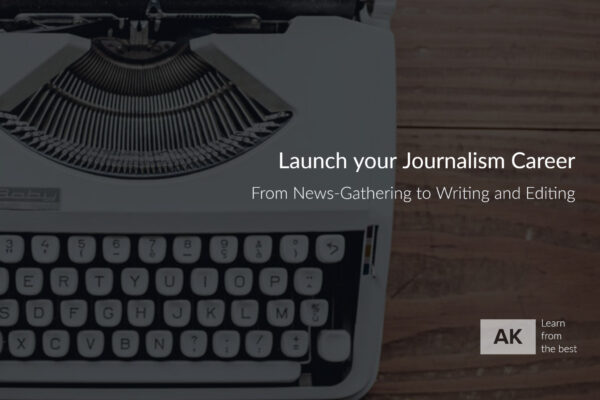 Introduction to Journalism with Vanessa Conneely

In this course I will introduce you to the skills of news-gathering, writing and editing a piece of work of your own. After our ten weeks together, I hope you will be confident enough to recognize and write an interesting story idea as well as pitch and send it to an editor. We’ll also discuss the current state of global media and how the industry is changing because of the rise of social media as well as citizen journalism.

Are you a member already? Log in to claim your discount.
Report Abuse

Report an abuse for product Introduction to Journalism

Introduction to Journalism is suitable for anyone over the age of 16 who wants to get a feel for being a journalist. Weekly assignments will allow you to use the motivation needed to get started and figure out which area of the industry you’d like to get involved in.

For a detailed overview of the course you may download the full course syllabus.

Vanessa, is a journalist, presenter, producer and documentary-maker with more than 20 years experience. During this time she has presented her own TV show, produced countless number of international news bulletins as well as reported on both national and international events. She’s worked in France, Canada, Australia, Qatar and Turkey for such news organisations as Aljazeera, CBC, Irish Times and TRT World. She’s also presented and produced a one-hour documentary called ‘Made in Turkey’.

What our students have to say

“Its a very interesting seminar, and the way it was explained the Golden Ratio it looks very simple and very important.”

After attending the Golden Ratio course with Stefan PriehybaCharles Zammit

“Amazing seminar and workshop on the Golden Ratio with Stefan Priehyba. Well done to the team for your professionalism. It was highly enlightening and i thoroughly enjoyed it. Looking forward to more.”

“Thank you AKartistry for the professional organisation. The topic was inspiring and truly interesting, we had a pleasant time.”

“Very Well Done. Top is the best word i can find. Something special.”

“For those art lovers out there, Art Classes provides the right environment where you can indulge in learning about real art. If you’re hooked on classical and fine art, this is the place to be.”

“It was an amazing workshop! looking forward to the next 🙂”

“Thanks a lot, I'm very grateful for attending your workshps Štefan Priehyba Camilleri, was a great experience and very interesting. You really have a good way of explaining and delivering such knowledge. And also a big thanks to Kelsey and Andrei of Art Classes Malta too for making it happen. 🙂”

“Wish the sessions aren't over. These intense 7 days in self-portraiture with Karl Froman were worth every penny and more!! Thanks Karl. I've learnt so much. Looking forward to the next 🙂”

“Art Classes Malta is a very good and professional school in Malta. I loved the courses of Painting and Classical Realism. The tutors were amazing and the level and depth of these courses is unparalleled locally. I have enrolled for another course in Interior Design.. looking forward for this new experience as well!”

“I am truly enjoying coming to the course , I adore your work ! 😍Thank you for the experience you share with us!. Many thanks 😘”

“My daughter really loves attending her lessons with ms Kelsey. I also attended 2 adult courses one with Kelsey and with Stefan.Great tutors I am very happy and thankful for offering us with such great courses!”

“Great tutors, would recommend to anyone that wants to develop their drawing and painting skills or just spend some time doing what they enjoy.”

“Loved every second going to these lessons. Its hard to find such intelligent and skilled teachers here in Malta! Please keep organizing more courses for us adults.”

(Upon booking you are automatically agreeing to our Terms & Conditions)

There are no reviews yet.

Other courses recommended for you

In response to COVID-19 most of our Art and Design courses are now being offered online.