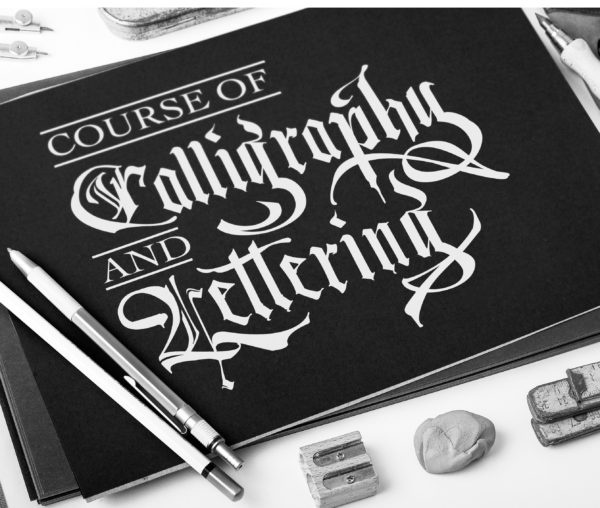 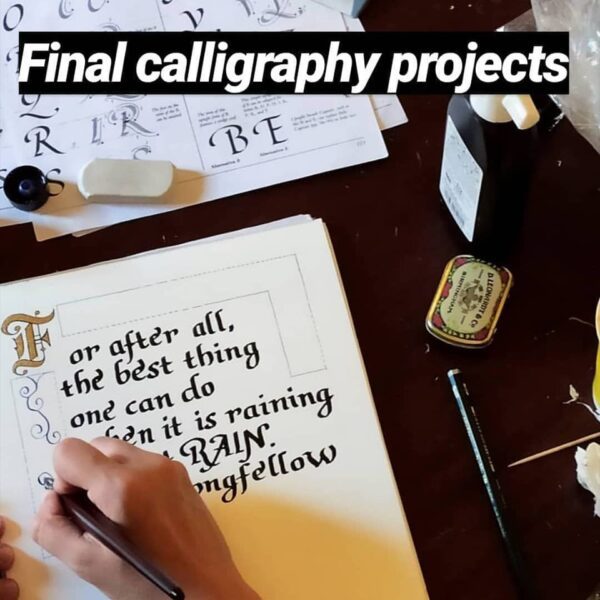 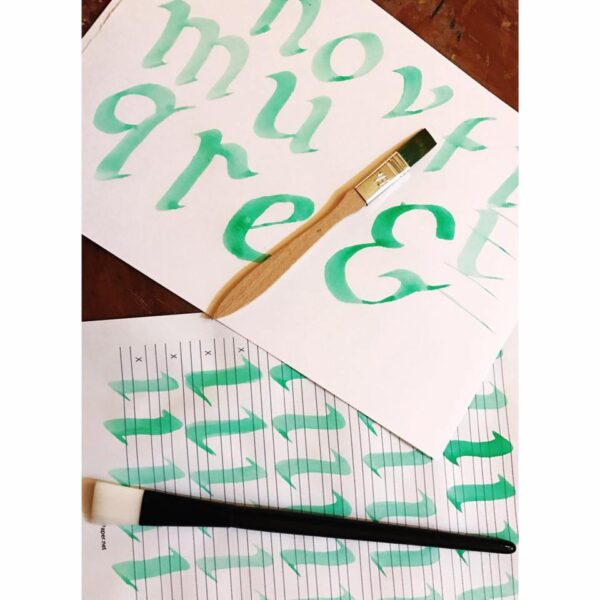 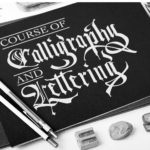 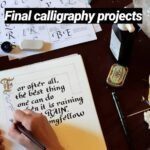 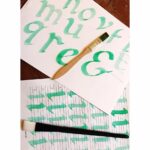 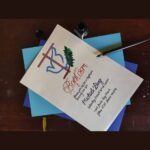 Discover the Art of Writing and Lettering

This course is an intensive exploration of the world of hand lettering and calligraphy. During this learning experience we will explore
various styles and typefaces, allowing you to experiment with a vast array of creative possibilities: from traditional techniques and
lettering styles, to new ideas and creative possibilities.

Throughout this course you will benefit from the hands-on practical experience you need to hone your craft through a series of
creative lettering workshops. Along the way we will also discuss theory, ideology, technique and process through lectures exposing you to a broad spectrum of subjects to help find your style/area of specialization as a hand letterer.

Times and Sessions: Multiple sessions to choose from (see selection below)

Are you a member already? Log in to claim your discount.
Report Abuse

Report an abuse for product Calligraphy and Lettering

By the end of this course you will learn the strokes, techniques and movements necessary to reach a level of confidence and proficiency with the tools. This includes practicing all typeface styles on paper during each lesson and building your personal style and portfolio along the way.

Who is this course aimed for?

This course is open to all levels. Whether you are an artist or designer seeking to branch into the world of Calligraphy and lettering or a complete beginner with little to no prior knowledge this course is easy to follow yet  sophisticated enough to keep you progressing and advancing your knowledge and skills.

Details: The Immersion workshop is a day workshop which spans over ~ 7 hours. Coffees and refreshments will be provided during breaks

An overview of what will be covered during the Intensive 1-day workshop:

PART 1: Introduction of Calligraphy and Lettering

PART 2: Typeface Anatomy, Styles and the evolution of different Types

PART 4: Introduction to Cursive styles with notion and examples

FINALIZING: Creative examples of how to mix black letters and brush pen to create sentences

Details: The full course spans over 10 weeks, with 1 session per week for a total duration of 30 hours.

The course will be split into the following modules below:

• Module 1: Introduction and The Divine Proportion in Calligraphy

• Module 2: Anatomy of Typeface and Styles

• Module 6: The Beauty of Copperplate Typeface

• Module 8: Create your own Poster

What will you Learn after this course?

This course will give you the hands on practical experience you need to hone your craft through a series of workshops and lettering tasks.

We will also discuss theory, ideology, technique and process through lectures exposing yourself to a broad spectrum of subjects to help find your style/area of specialization as a hand letterer. All your work will be guided and critiqued by a professional lettering designer. 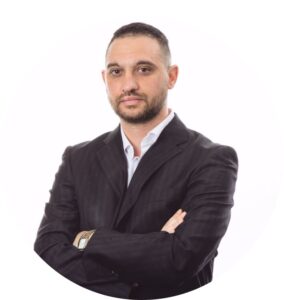 Cesare, is an Italian designer who has spent the last 14 years working as a professional designer and lettering artist, first entering the world of visual arts during the late 1990’s as a graffiti artist.
After graduating in Design and Communication at IED in 2003 in Rome he began his career as a designer working in the industry, later went on and developed a passion for calligraphy and lettering.
Throughout his artistic career as a graffiti and lettering artist and designer he lived and worked in many cities including: Rome, Bologna, Milan followed by a year in South America – precisely in Santiago de Chile- , where he became influenced by ‘muralism’ and South American culture, which has had an deep impact on his artistic production ever since.
He later moved to London where he worked for various communication agencies, carried out projects with luxury brands while continuing his artistic research.
Influenced by a visit to TATE he became fascinated by the great works of contemporary artists such as Gerard Richter, Franz Kline, Rochko and various informal Italian painters of the 50s and 60s like Emilio Vedova.
Cesare, finds great fascination and creative inspiration through the parallels and similarities in the attitude of informal painters with graffiti where the speed of execution and creative instinct are at base.
He has been creating various works in London commissioned by globalstreetart.com and sets for the large-scale Teatro di Calabria. 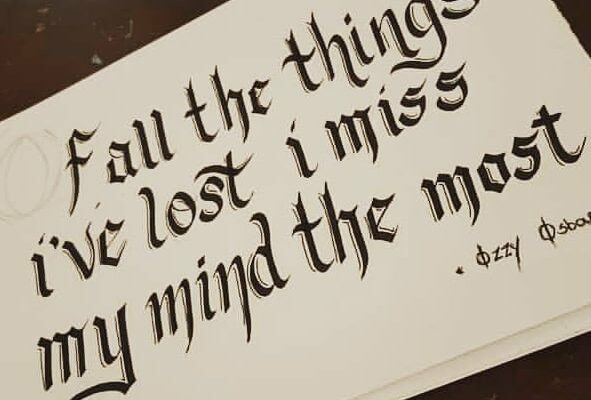 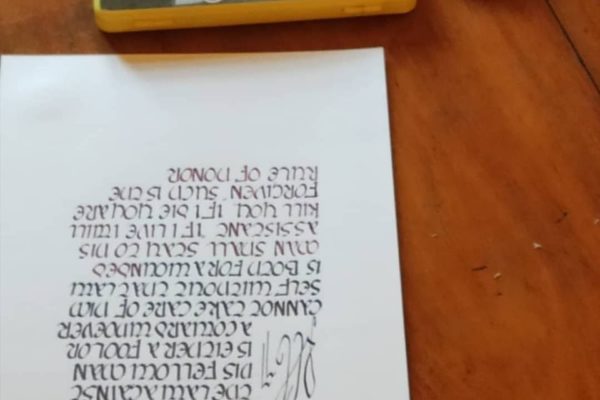 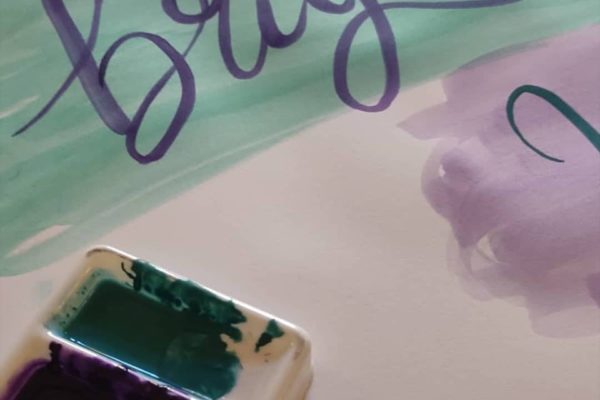 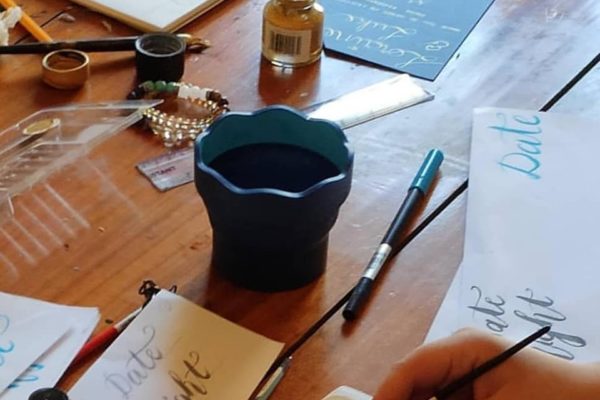 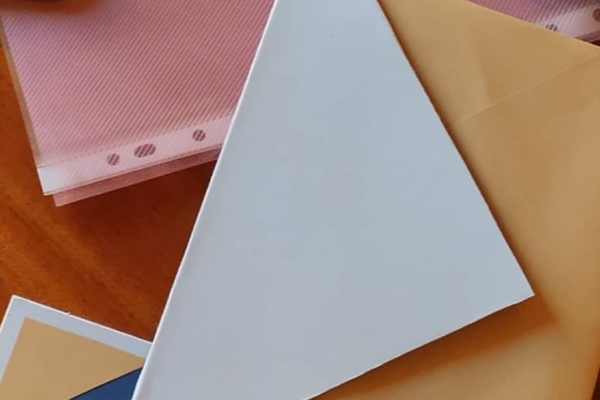 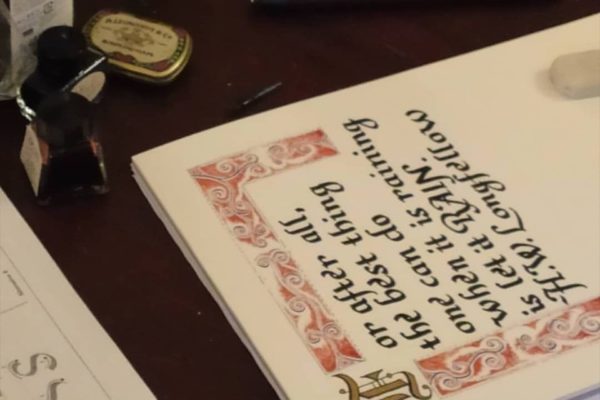 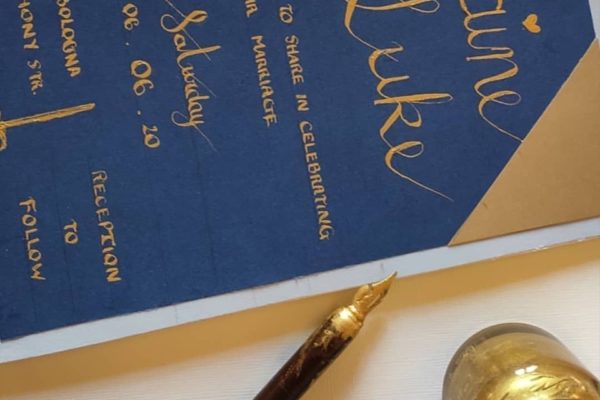 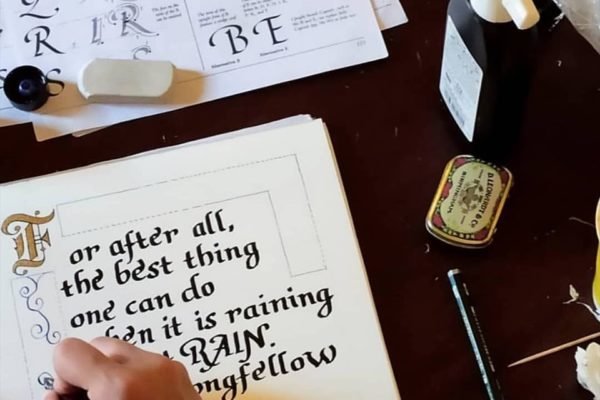 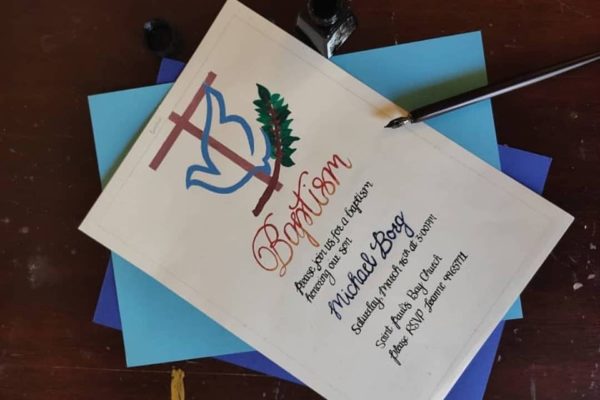 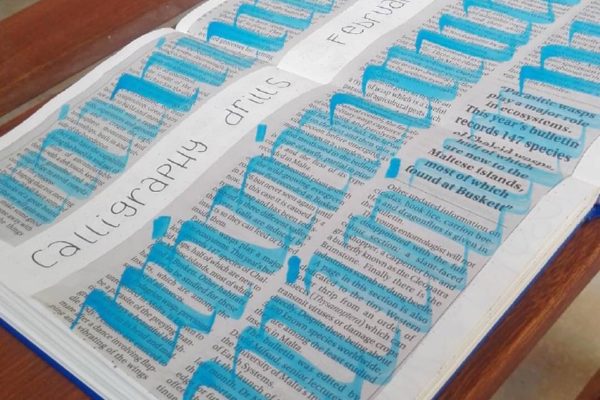 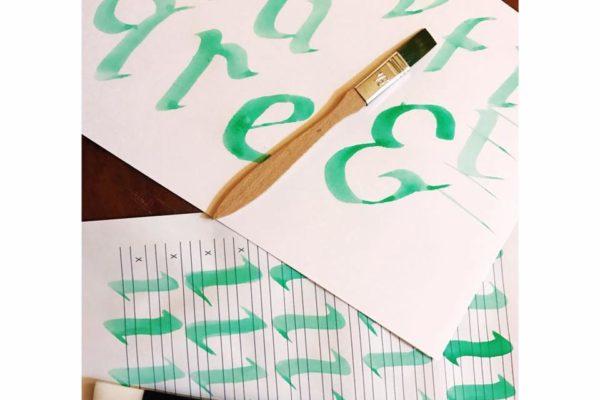 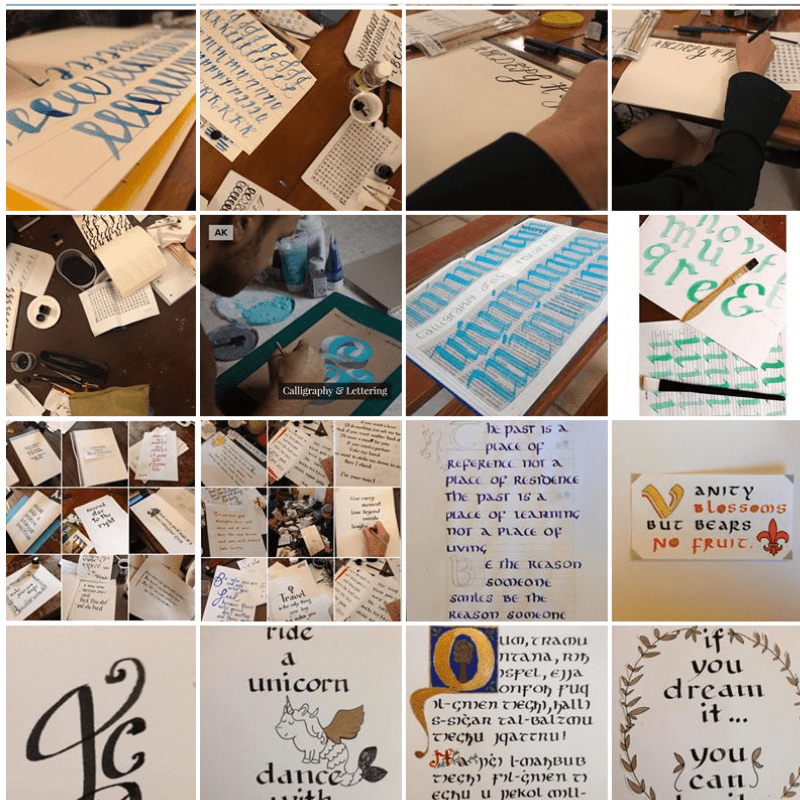 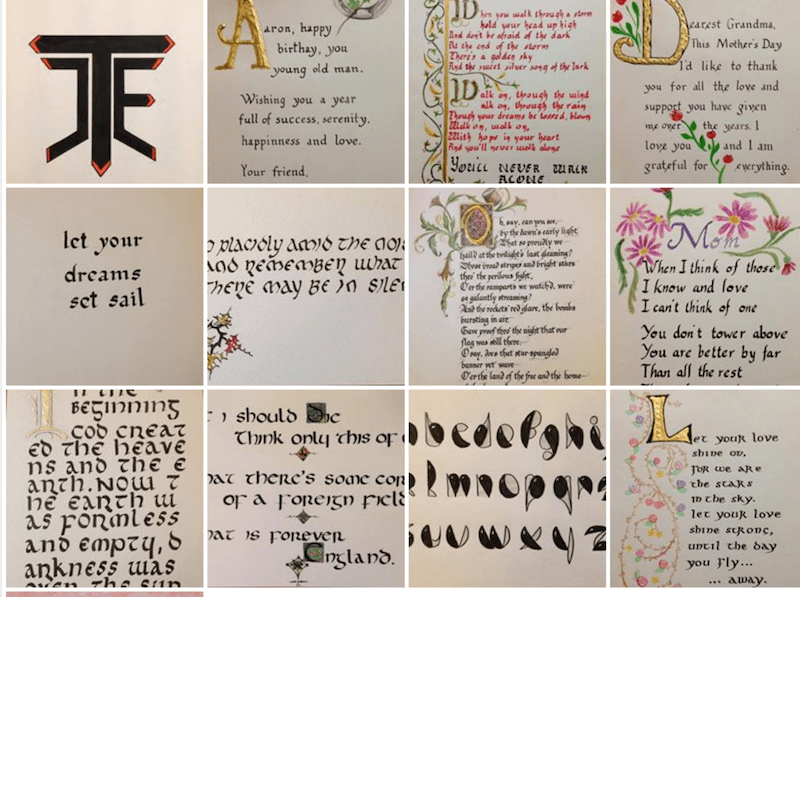 Over 800+ students have subscribed. Register below to stay tuned about upcoming courses and sessions.


Kindly only register in if interest in undertaking this course.

What our students have to say

“Its a very interesting seminar, and the way it was explained the Golden Ratio it looks very simple and very important.”

After attending the Golden Ratio course with Stefan PriehybaCharles Zammit

“Amazing seminar and workshop on the Golden Ratio with Stefan Priehyba. Well done to the team for your professionalism. It was highly enlightening and i thoroughly enjoyed it. Looking forward to more.”

“Thank you AKartistry for the professional organisation. The topic was inspiring and truly interesting, we had a pleasant time.”

“For those art lovers out there, Art Classes provides the right environment where you can indulge in learning about real art. If you’re hooked on classical and fine art, this is the place to be.”

“It was an amazing workshop! looking forward to the next 🙂”

“Thanks a lot, I'm very grateful for attending your workshps Štefan Priehyba Camilleri, was a great experience and very interesting. You really have a good way of explaining and delivering such knowledge. And also a big thanks to Kelsey and Andrei of Art Classes Malta too for making it happen. 🙂”

“Art Classes Malta is a very good and professional school in Malta. I loved the courses of Painting and Classical Realism. The tutors were amazing and the level and depth of these courses is unparalleled locally. I have enrolled for another course in Interior Design.. looking forward for this new experience as well!”

“I am truly enjoying coming to the course , I adore your work ! 😍Thank you for the experience you share with us!. Many thanks 😘”

“Very Well Done. Top is the best word i can find. Something special.”

“My daughter really loves attending her lessons with ms Kelsey. I also attended 2 adult courses one with Kelsey and with Stefan.Great tutors I am very happy and thankful for offering us with such great courses!”

“Great tutors, would recommend to anyone that wants to develop their drawing and painting skills or just spend some time doing what they enjoy.”

“Loved every second going to these lessons. Its hard to find such intelligent and skilled teachers here in Malta! Please keep organizing more courses for us adults.”

(Upon booking you are automatically agreeing to our Terms & Conditions)

There are no reviews yet.